by Moja Desk
5 Comments
Vatsal Srivastava, consulting editor with IANS, has come up with a mediocre article in Economic Times stating that the biggest risk to the India story today is a hawkish RBI Governer RaghuRam Rajan!! 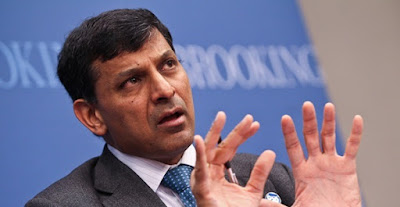 1. All predictions about an eminent bear market proved wrong: Marc Faber is famous for calling the market crash of 1987. But every year since 2008, he has been predicting a bear market in US equities. Nobel laureate Robert Shiller is famous for calling the US housing bubble and the following crash of 2007-08. He too has been bearish on US stocks for the last three years. Market guru Jim Rogers who correctly called the commodity bull run from the late 1990s has been predicting a bull market in agri-commodities and the demise of the US dollar since the past many years. Peter Schiff, who predicted the financial crisis has been predicting gold to hit $3,000/oz since a long time. All these calls have been wrong.

Our take on this : Lets wait for next 6 more months and see the words of Robert Shiller, Jim Rogers and Peter Schiff were worth watching. Today as we write this article, we are witnessing the biggest weekly turmoil in US markets for this year!!. Who knows the words of these three legendary investors were prophetic in nature.

2. Rajan should cut rate immediately: Blaming Rajan’s comment on real estate builders to reduce the price, Vatsal Srivastava says that RBI Governor should mind his own business!!. “He should rather aggressively cut interest rates so that home loans become cheaper and the housing market will find its equilibrium as they do in any free market. Similarly, it is not his job to be commenting on how there should be globally coordinated exit strategy from quantitative easing. Monetary divergence is the global macro theme right now.”

Our take on this : As the watchdog of Indian economy, we believe that RBI Governor has the very right to comment,advise and provide opinion about all the matters which affects Indian economy. We firmly believe that what ever steps he has taken till now as RBI chief, has been appreciable and fruitful. We cant you to continue as the same, till your tenure is over or this “Ache Din” government throw you out.

3. Blame on the cautious approach of Rajan: By pointing out an innocent comment by Rajan on crude oil(“Rebound in energy prices is a key risk to growth and inflation), Vatsal Srivastava smashes on Rajan. “Firstly, Rajan has failed to understand the trend in global commodities, especially oil.” Again he continues as “Secondly, being a lonely hawk within a global deflationary environment himself, my guess is that he expected the US Fed to increase interest rates much earlier. He wanted to keep ammunition in his bag in terms of domestic rate cuts in case global markets witnessed turmoil. But clearly, that all has been wrong.”

Our take on this : We want our RBI Governor to be cautious about the micro and macro economic condition. Currently all participants are aggressively pumping money into market, ignoring all global economic issues which are prevalent from 2008. And to be honest, we don’t want a rate cut for a mere 200 points Nifty up movement. Monsoon Reports have just came which shows 9% deficiency. Monsoon deficiency has been recorded in all the four divisions of the country – East and Northeast, Southern peninsula, Central India and Northwest, triggering fears of drought in some parts. The India Meteorological Department has already predicted a “deficient monsoon” of around 12 per cent. So let’s the fundamentals be stable.

4. Blame on Dollar Buying: Vatsal Srivastava continues his rampage – “while Rajan and his peers at the RBI had the right strategy of recouping FX reserves by buying back dollars at around 60-62, we aren’t seeing much benefits of that either. The idea was that on a rainy day, the RBI would actively intervene and defend the rupee.”

Our take on this : Rupee is already trading near Rs.66 per Dollar. What else you what Mr. Vatsal Srivastava??

To wind up, just sharing the thoughts of an ET reader on this article
“Third class article by a puppet. Cost of capital is not the hinderance to start a project. Besides why the cost is higher? Why can’t the industry get loan at the rate of a homeloan? Ask that to Mallya and not the RBI. Gov Rajan has explained it beautifully many a times, but puppets can just dance to the tune of their masters. #shame”  – Navin

India in a Bear Market: Sridhar Sivaram is the First Person to Point Out “The King is Naked”