by Moja Desk
2 Comments
We feel Its a good time now, to have a small % invested in some well managed companies from the out of flavor sectors from a long term point of view. Finding Quality from such sectors is a difficult task as most of the companies are trading very cheap. Its seems like value’s everywhere 🙂
We are not ruling out the risks such as CAD,Inflation, tapering and other macro issues. However some of these can be addressed if effective policies come into place. We think whichever government comes into power, it becomes compulsory for them to address these issues if the economy has to grow.
When we thought about such sectors capital protection was the priority and Ashoka is one of the well managed,governed and shareholder friendly company and can be considered for investment from this space. We thought recommending Ashoka now makes sense even when its not very very cheap in terms of valuations. Remember quality comes with premium !!

Company overview
Ashoka builds and operates roads and bridges in India on a build, operate and transfer (“BOT”) basis. Ashoka Buildcon Ltd has one of the largest number of Toll road projects on BOT in the country.
In addition, to BOT projects, Ashoka also
The business is organised into four divisions: 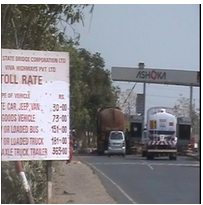 EPC division primarily engineers and designs, procures the raw material and equipment for and constructs roads and bridges for the BOT division and third parties. EPC division also

(a) maintains and repairs existing roads for BOT               division.
(b) constructs and modernizes power distribution            networks, comprising distribution transformers            and electricity substations for third parties and
(c) constructs commercial, industrial and institutional        buildings for third parties. Ashoka owns a large            fleet of construction equipment.
RMC and bitumen division sells ready-mix concrete and bitumen and supports the EPC division by ensuring that it has an adequate and timely supply of high-quality RMC and bitumen. it has 14 RMC plants with a total production capacity of 650 cubic metres per hour and 86 concrete transit trucks and 19 concrete pumps. This division also sells and processes bitumen to a higher grade for use in road projects and supports EPC division by supplying it with bitumen. Ashoka has one plant in Pune for the processing of bitumen with a capacity of 60 metric tonnes per day.
The Company continues its focus on newer, innovative construction practices as well as ensuring high quality in its entire works. The company has tied up equity for the entire project portfolio and also for the future growth.
SBI Macquarie funding
SBI Macquarie is an investor at the step down levels, so we have the comfort of someone else having done the diligence on the company as a result, the balance sheet is in good shape.
SBI-Macquarie’s  commitment of capital infusion in 7 of Ashoka’s BOT projects will not only free up Ashoka’s equity but also provide visibility on the revenue potential of these assets through timely completion. The fund’s commitment will help Ashoka secure large ticket projects in future (the company is eligible to bid for projects of over Rs 30 billion).
Ashoka has so far received Rs.4.9 bn from SBI Macquarie. Balance money will be received in installments by September 2014 as per equity requirement of projects under construction. Total equity requirement over next 18 months amounts to Rs.3.6 bn out of which Ashoka is required to infuse Rs.1.5 bn.
Healthy order book due to great execution skills
Order book at the end of Q3 FY 14 stands at Rs.43.2 bn, up 6.1% yoy .Of this,roads comprise 71% of the orders and 29% are contributed by power T&D segment. The order book does not include KHSIP-II and toll collection contract.
Management has stated that as a general trend , traffic on operational BOT projects have seen some improvement in prev. months and expects growth to be better in Q4 FY 14.Management expects to bid for projects worth Rs.100 bn on EPC basis and Rs.150 bn on BOT basis.
Not so aggressive approach
Ashoka has a very good mix of completed projects plus couple of BOT projects becoming operational soon and that will support healthy cash flow. The cash position will allow them to re-enter the bidding whenever they see the opportunity.They have been very careful not to get involved in aggressive bidding that was going on in the sector. The margins are pretty good as well and when we value the company based on their entire portfolio projects.
Promoter holding
Promoters hold near to 68% and a good chunk i.e 17% with DII makes the free float very less.
dividends+Wealth creation for shareholders
Company pays good dividend.It also pays interim dividend as well. It had even issued bonus in 1:2 ratio and stock split from F.V 10 to 5 recently .
Recent developments

Finance Ministry decision to reschedule premium for roads, as suggested by the Rangarajan Committee, is likely to benefit Ashoka’s 2 highway projects. One is Dankuni Kharagpur and other is Belgaum Dharwad.
Conclusion
So where is value here ?? Simple !!! We found value in terms of the business which can come up in future from BOT, EPC, and other highway road projects and Ashoka’s ability to take up such projects.
Ashoka becomes the preferred choice as their past record is excellent in executing complex projects and finishing it well before dead lines as well.
Ashoka has managed to perform better at tough times. Its no rocket science to understand the future of this company.We have no doubt and feel Ashoka is yet to see the Good Days !!
CMP ~70.
Safe Investing Guys!!.
*Stock has moved slowly from 60 levels.We feel Long term investors have no risk. However we leave it to ones own perception in the case for Short-term investors.
Kindly share if you find this post informative

$650 billion opportunity by 2025 for Textile Industry: Pick the winners now!!