9 Things You Should Know About Ethereum & Ether

by Moja Desk
No Comments
Ether is the second most valued crypto currency, after Bitcoin with a market capitalization of nearly USD 22Billion. It has give a spectacular rally in the last 3 months, raising from 10$ to 250$. Lets try to understand what is ethereum and ether and see if it looks like a viable investment option. Please keep in mind that, similar to bitcoin ethereum is also not regulated in our market.

Ethereum is basically an open software platform based on blockchain technology that enables developers to build and deploy decentralized applications and smart contracts and ether is the fuel behind it. Let me explain it with a simple example. Ethereum is similar to a car manufactured by a car manufacturer like Audi. Now for running the car, we need petrol.

As an investor we know that so many cars are going to come out to market and we love to make an investment in the fuel which helps to run the car. In real life we know that petrol is manufactured by oil manufacturing companies. In ethereum world, ether is the fuel for running ethereum based applications and the fuel is created by ethereum developers(via ICO) and support team (minors or people who take cares of writing the data created by ethereum applications) into decentralized database, called as blockchain.

2. WHAT IS ETHER IN DETAIL?

Ether can be considered as fuel for operating the distributed application platform Ethereum. It has the same concept of Bitcoin. As an investor we can consider it as a crypto currency which has a storage value. It is basically a form of payment made by the clients of the platform to the machines executing the requested operations.

To put it another way, ether is the incentive ensuring that developers write quality applications, and that the network remains healthy. People are compensated with ether for their contributed resources towards ethereum project as I mentioned above.

3. HOW ARE ETHER CREATED?

As I mentioned earlier, ether is created in two methods.
1. As part of Initial coin offering ot ICO. This is similar to IPO’s in stock market
2. As incentives to minors who write data in ledger, similar to incentives given to patrol pump owners for selling patrol.

The total supply of ether and its rate of issuance was decided by the donations gathered on the 2014 presale or ICO. The results were roughly:

4. IS THE SUPPLY OF ETHER INFINITE?

Theoretically yes but practically no. According to the terms agreed by ethereum foundation on the 2014 ICO, issuance of ether is capped at 18 million ether(1.8 crores of ether) per year (this number equals 25% of the initial supply). This means that while the absolute issuance is fixed, the relative inflation is decreased every year. In theory if this issuance was kept indefinitely then at some point the rate of new tokens created every year would reach the average amount lost yearly (by misuse, accidental key lost, death of holders etc) and there would reach an equilibrium.

But the rate is not expected to be kept: sometime in 2017 Ethereum will be switched from Proof of Work to a new consensus algorithm under development, called Casper that is expected to be more efficient and require less mining subsidy.

The exact method of issuance and which function it will serve is an area of active research, but what can be guaranteed now is that (1) the current maximum is considered a ceiling and the new issuance under casper will not exceed it (and is expected to be much less) and (2) whatever method is ultimately picked to issue, it will be a decentralized smart contract that will not give preferential treatment to any particular group of people and whose purpose is to benefit the overall health and security of the network. 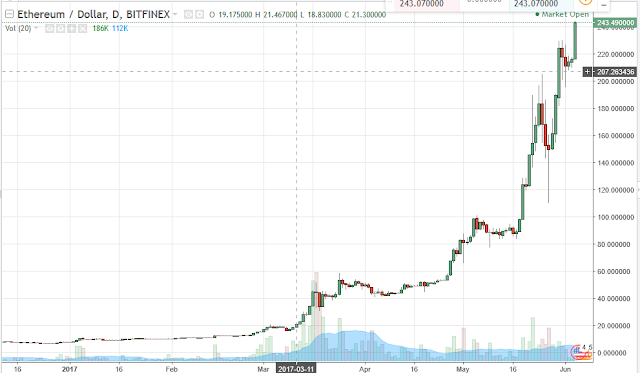 Then how do I collect money from people?. It is pretty simple, I would collect ether from potential investment and keep it as a working capital for my development activities. To give an example, BAT is a new ICO came into market. It is a advertisement free browser developed under the leadership of Javascript creator. For 1 ether they gave 6400 BAT.

6. RELATIONSHIP BETWEEN BITCOIN AND ETHER

Ethereum would never be possible without bitcoin as the ethereum technology and bitcoin currency are complementary within the digital ecosystem.

Below are few examples for relation between BTC and Ether

Trade BTC for ETH: Many third party companies (coinbase, poloniex) are working to make the exchanging of ether and bitcoins as easy and seamless as possible. If so desired one could trade bitcoins for ether with the purpose of executing contracts and trade it back immediately in order to keep their value pegged and secured by the bitcoin network.

The latest version of the wallet (eg: myetherwallet) includes an automatic conversion between ether and bitcoin. India is waiting for its exchanges like zebpay to enhance their application to include ethereum and thus allowing trade between BTC and Ether.

Use a pegged derivative: Ethereum is a great tool for creating complex trading between multiple parties. If you have a source for the price of Bitcoin that all parties trust, then it’s possible to create an ethereum based currency whose value is pegged to the market value of Bitcoin. This means that you could trade bitcoins to a token that is guaranteed to always trade back to the same amount of bitcoins while still being fully compatible with other ethereum contracts.

Ether is to be treated as “crypto-fuel”, a token whose purpose is to pay for computation. Though it is not intended to be used as or considered a currency or asset, we can buy and hold it for long term which could potentially be a multi-bagger.

7. WHAT IS A SMART CONTRACT?

Smart contract is just a technical term used to describe computer code that can facilitate the exchange of money, content, property, shares, or anything of value. When run ethereum blockchain a smart contract becomes like a self-operating computer program that automatically executes when specific conditions are met.

A real world example is the stop loss we put for a stock. Once the order is placed, we dont need to be in front of the computer or trading terminal for the order to execute. If stock price breaches the stop loss level, the trade is automatically triggered. Similarly smart contracts run on the blockchain and they run exactly as programmed without any possibility of censorship fraud or third party influence.

8. WHAT IS ETHEREUM VIRTUAL MACHINE?

Coded by Vitalik Buterin, inventor of Ethereum,Ethereum Virtual Machine (EVM) is a Turing complete software that runs on the Ethereum network. It enables users to run any program, regardless of the programming language given enough time and memory.

The Ethereum Virtual Machine makes the process of creating blockchain applications much easier and efficient than ever before. Instead of having to build an entirely original blockchain for every new application, Ethereum virtual machine enables the development of potentially thousands of different applications all on one platform.

Ether can be stored in the cold wallets provided by the exchanges (coinbase, poloniex, ethexindia etc). We can keep it there without any fee for any long time. But it is more secure to create a paper wallet using myetherwallet.com or any similar site and keep the coins completely off-line, provided you are a long term investor.

conclusion: Personally I am more interested in ethereum due to its disruptive technology potentials and its disciplined growing developers community. As always caution advised while investing. And post has been bit technical, sorry for that 👳

Should I Invest in Dogecoin – Answered