7 Reasons For You to Start CryptoCurrency Investment

by Moja Desk
2 Comments
I covered Bitcoin in this blog for the first time in Feb 2017, nearly 3 months back and hinted about  potential investment opportunities around crypto currencies, especially Bitcoin. It was trading around INR 60,000. Since then it has more than doubled and now trading at INR 130,000. I have been doing a bit of research during the last 3 months and the techie in me is compelling me to put some small amount, an amount that I can afford to lose, in Bitcoin. In the last 3 months, many positive developments happened around Bitcoins as detailed below.  These points are just a starting reference for the readers to see CryptoCurrency as an alternative way of investment. Keep in mind that India is yet to legalize Bitcoin trading or investment.

1.Japan started recognizing Bitcoin as a legal method of payment

Japan’s legislature passed a law that brought bitcoin exchanges under anti-money laundering/know-your-customer rules, while also categorizing bitcoin as a kind of prepaid payment instrument. There are unconfirmed news that Russia is also working towards legalizing crypto currencies in near future itself.

2. The US Bitcoin Exchange Market Become the Largest Bitcoin Market

Prominent gold investors are slowly increasing their stake in various crypto currencies across the world. Mike Maloney, the founder of GoldSilver.com, encouraged other investors to maintain Bitcoin as a mandatory investment in their portfolios in case of market instability and unforeseen economic uncertainty.I firmly believe that considering gold as a hedge against market volatilities is reducing and going forward crypto Currencies will be considered as the best hedging tool. Even mainstream media analysts have emphasized that Bitcoin, alongside gold, has demonstrated a surge in demand as investors started to seek out for alternative and safe haven assets to protect their wealth.

Major European retailer Alza has begun accepting Bitcoin and installing Bitcoin ATMs in its outlets in Prague and Bratislava. In Europe, especially in Germany, Bitcoin has emerged as the most convenient mode of payment. Now Banks are giving online facility to buy Bitcoins from intermediary providers like coinbase. This adoption is going to increase dramatically in coming days.

5. Bitcoin ATMs Coming Up All Around

Bitcoin based ATMs are increasing in USA and Europe. For example, Coinsource, the American bitcoin ATM network, now operates 103 machines across the country. Read the words of CEO and co-founder of Coinsource, Sheffield Clark:-  “Breaking triple digits was earmarked as one of our main goals for our five-year business plan, but we’ve reached it several years earlier than expected. We have many more surprises in the pipeline for 2017, and are currently conducting the groundwork for rapid expansion across the country.”

6. Blockchain Assets to be Accepted as Collateral

Going forward I firmly believe that private lenders will start accepting Blockchain Assets like Bitcoin, ethereum etc as Collateral. This may not happen for all crypo currencies in the market but atleast the top 3, according to market capitalization. The great advantages of Blockchain assets compared to other traditional immovable assets like real estate or gold are that, it is an ideal form of collateral because they are inexpensive to transfer, store, and liquidate. I will write a separate post on the upcoming lending platform for crypto currencies. 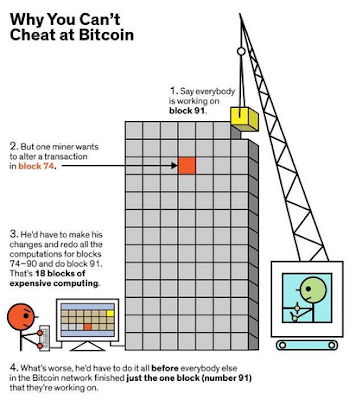 As an always insist, kindly do your research before you start investing. Happy investing guys!!.

NB: I am getting many mails on how to start investing in Bitcoins. I prefer Unocoin as it provide simple interface and easy fund transfer facility. Below are the steps
1. Click below link and register.
2. Complete the simple process for KYC.
3. Once you get the confirmation, transfer funds online and start investing. You can even buy for small amounts like INR 5000. 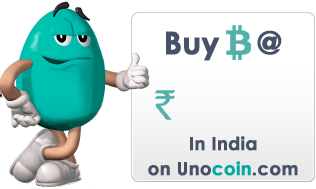